We made a series of short films documenting some of the voices we encountered during the pilot study in 2016. Each one deals with a different aspect of the findings.

This video introduces the Manchester Voices project, summarising the research that has been done so far and thanking participants and partners for their input and involvement.

This video deals with notions of place and belonging, and the ways in which we label and discuss local boroughs and larger regions, such as Greater Manchester.

This video includes clips of participants discussing their local communities and the other boroughs of Greater Manchester, as well as describing the places and people within them.

This video shows clips of participants describing their accents and dialects and giving examples of local and regional words, phrases, grammar and pronunciations.

In this video, participants share their thoughts on the links between the way they speak and who they are, along with how they think they are perceived by others based on the way they speak. It deals with the issues of pride and stigma surrounding regional accents and dialects. 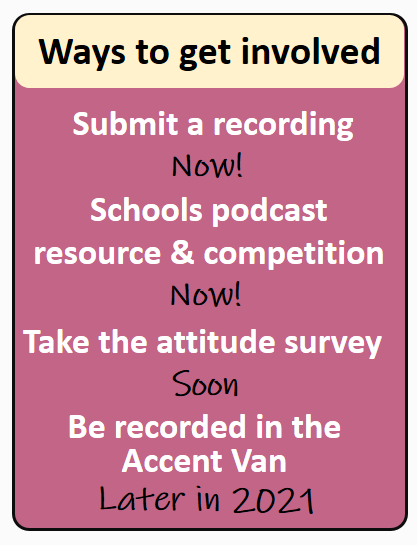 Manchester Voices is run by Dr Rob Drummond and Dr Erin Carrie at Manchester Metropolitan University. The project is funded by the Arts and Humanities Research Council.

"For someone of my generation, who lived through the heyday of the #Manchester music scene, I think that brought a sense of attachment and #identity to the idea of Manchester."

"Your accent is where you're from and you can be proud of that."

Well this adds an interesting aspect to our project!

Just dropped these recorders off at a local school to help their students take part in the #TalkingAboutVoices strand of http://manchestervoices.org! 😁😁

"Well I think you always speak in a similar way to the people around you, so that you don't stand out and talk posh."

A clip from our #Voices2016 visit to #Rochdale in the #AccentVan 🗣️🚐