Rob is a Reader in Sociolinguistics at Manchester Met, and Head of Youth Language at the university’s Manchester Centre for Youth Studies. He researches, teaches, and writes about the relationship between spoken language and identity. He publishes in this area, particularly in relation to the language of young people, but does other public-facing work in various additional areas around language and society. As well as running Manchester Voices, Rob also looks after the Accentism Project. More details about Rob here and on Twitter: @RobDrummond

Sadie is a Research Associate in Linguistics at Manchester Met. Her PhD research focused on language use and identity among Polish teenagers in a Glasgow high school. Her research interests include sociolinguistic variation and its role in identity construction, migration, adolescence, linguistic discrimination, and the treatment of language in high school education. She produces a podcast, Accentricity, aiming to narrow the gap between academic knowledge about language and people’s everyday linguistic experiences. Twitter: @sadie_d_ryan / @accentricitypod

Holly is a Research Associate in Linguistics at Manchester Met. She is a sociolinguist who researches sociophonetic variation and change, and has previously worked on Cornish English, exploring how associations with rurality may influence language change. More broadly, she is interested in combining speech perception and production methodologies to explore the social meaning of linguistic variation. 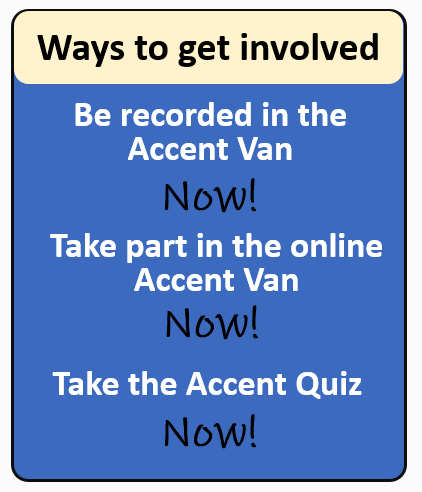 Manchester Voices is run by Dr Rob Drummond, Dr Sadie Ryan and Dr Holly Dann at Manchester Metropolitan University, having originally been set up by both Rob Drummond and Dr Erin Carrie. The project is funded by the Arts and Humanities Research Council.

The Accent Van goes on tour

"Maybe I try to come across a bit more articulate than I am?"

A clip from one of our recent outings in the #AccentVan. You can still add your voice to our research via the #VirtualAccentVan:
https://virtualvan.manchestervoices.org/

"I do like the way I speak, and I would never want to change it."

There's still time for you to add your voice: https://virtualvan.manchestervoices.org/

We're still looking for more people to take part in our #AccentQuiz! Anyone at all can take part, but we're particularly in need of people from #Bolton, #Wigan and #Oldham. Just click here to get started > https://research.sc/participant/login/dynamic/4EC556B5-6E1A-4E7F-ACC3-4EBA4645E707

Can you tell where in #GreaterManchester someone is from just by the way they speak? Take our #AccentQuiz and see how you score! Click here to begin:
https://research.sc/participant/login/dynamic/4EC556B5-6E1A-4E7F-ACC3-4EBA4645E707

"I don't go to a job interview with this #accent, they'll think that I'm trying to mug them."

A clip from a recent trip to #Bury in the #AccentVan. There's still time to take part via the #VirtualAccentVan! https://virtualvan.manchestervoices.org/

Do you ever find that voice recognition technology struggles to understand your accent? Or does Alexa get you just fine? You can take part in research into this subject and help to create more accessible technology!

🎙️Still looking for respondents from the North & North East of England who use automatic speech recognition systems (or struggle to use them as the case may be)!